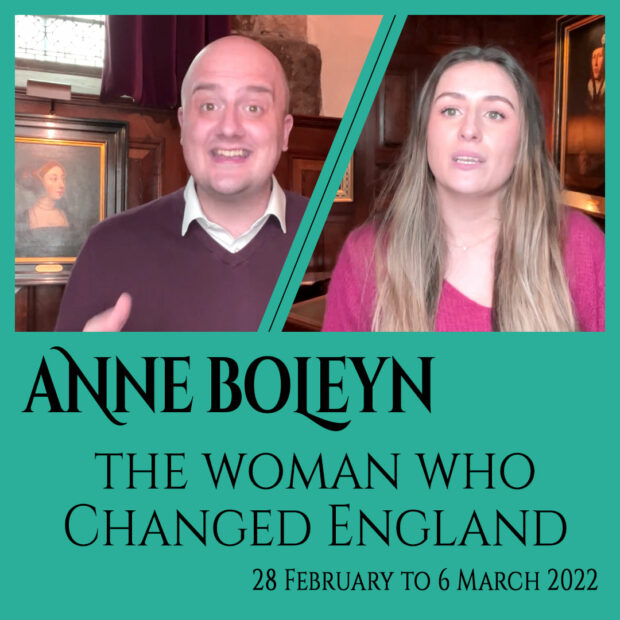 There are just 3 days until doors close for tickets for my 10-day Anne Boleyn online event!

What made Anne Boleyn the woman she was is what we're exploring for the ten days of the online "Anne Boleyn, the Woman who Changed England" event.

One of Anne Boleyn’s most defining characteristics, one that marked her out as different from the traditional model of English court ladies and captured the eye of the king of England, was her agency.

In many aspects of her life, Anne was the opposite of passive, the opposite of the expected. In her style, her language, her religious beliefs, her boldness, her airs and graces, Anne was unexpected. She did not follow the grain. She stood out. Equally, however, she knew the importance of using the established gender roles to her advantage, of presenting herself as the ‘lovynge and kynde’ wife-in-waiting.

Owen and Kate's talk will examine the ways in which Anne consciously created and curated her own image working both within, and outside of, expected gender norms. It will be fascinating, AND it's filmed on location at Hever Castle!

Dr Owen Emmerson is the Castle Historian and an Assistant Curator of Anne Boleyn’s childhood home of Hever Castle.

He completed his doctoral research on the abolition of corporal punishment at Sussex University.

In 2021, he published his first book entitled “The Boleyns of Hever Castle”, with co-author Claire Ridgway.

He has appeared in several documentaries on the Tudor Era, including the three-part BBC docudrama “The Boleyns: A Scandalous Family” and a My5 documentary "Lady Rochford" on Jane Boleyn. He is also the co-founder of Hever Castle’s online subscription site “Inside Hever Castle”.

Kate McCaffrey is one of the Assistant Curators at Anne Boleyn's childhood home of Hever Castle in Kent.

She completed her Master's degree earlier this year with Distinction in Medieval and Early Modern Studies at the University of Kent, where she uncovered new and exciting discoveries about a small Book of Hours, once owned by Anne Boleyn, that is currently held at Hever Castle.

Kate completed her first-class undergraduate degree in History at the University of Warwick, with a term spent abroad in Venice. Kate is continuing her groundbreaking work with Anne Boleyn's Books of Hours in her new role at Hever Castle.

First and foremost, I wanted to send out a huge thank you to you and to Tim for putting this event together. It has been an absolute delight and I