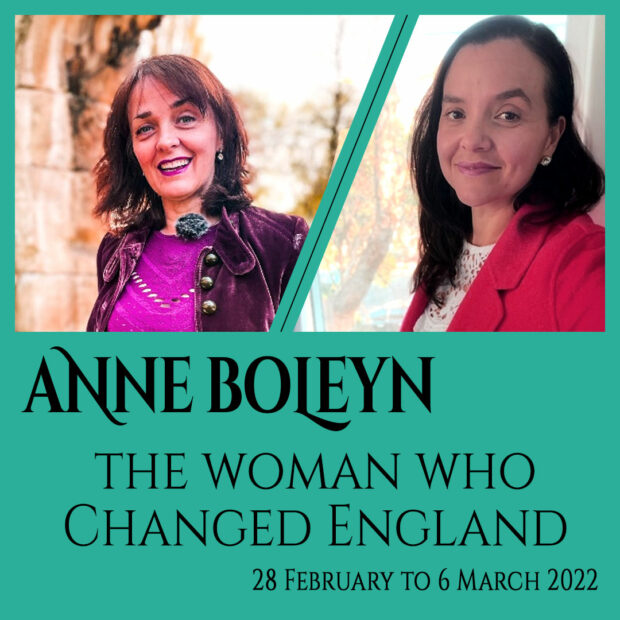 It's only a week to go before my online event "Anne Boleyn, the Woman who Changed England" kicks off and only 4 days until the doors close.

You will know Natalie Grueninger and Sarah Morris from their books "In the Footsteps" books and from their websites and podcasts, and I'm delighted to feature them both in my Anne Boleyn event. They're wonderful speakers and are experts on Anne Boleyn places.

Have you ever wanted to know more about some of the places Anne Boleyn knew intimately during her early years in England, Mechelen and France? Drawing upon the extensive research undertaken for the writing of their No 1 Amazon bestseller, "In the Footsteps of Anne Boleyn", Sarah Morris and Natalie Grueninger take us on a lively adventure as they reimagine Anne's early years through the places she visited and called home.

From Blickling Hall to Paris and the glorious chateaux of the Loire, Natalie and Sarah will describe the buildings she knew, and explore some of the early, cultural forces that we believe shaped Anne Boleyn's later character and tastes. Pack your virtual bags and get ready to time travel!

Here are trailers for their talk.

Natalie Grueninger is a researcher, author, podcaster and educator, who lives in Australia with her husband and two children.

In 2009 she created On the Tudor Trail, a website dedicated to teaching and promoting Tudor history.
Natalie is fascinated by all aspects of life in Tudor England and has spent more than a decade researching the period. She’s also passionate about amplifying women’s voices and building supportive and uplifting online communities.

Her first non-fiction book, co-authored with Sarah Morris, "In the Footsteps of Anne Boleyn", was published by Amberley Publishing in the UK in September 2013. Book number two in the series, "In the Footsteps of the Six Wives of Henry VIII", was released in the UK in March 2016. In 2017, Natalie collaborated with illustrator Kathryn Holeman to create "Colouring History: The Tudors", a unique and beautifully illustrated colouring book for grown-ups that features images and scenes inspired by the ever-fascinating Tudor dynasty. The second book in the series, "Colouring History: Tudor Queens and Consorts", was released in May 2018.

Natalie’s first solo book, "Discovering Tudor London", was published in the UK by The History Press in August 2017. She is currently working on a book about the final year of Anne Boleyn’s life, due for publication in November 2022.

Natalie is the host of ‘Talking Tudors’, a podcast for lovers of Tudor history, and the founder of the Women’s History Circle, dedicated to promoting the work of women creatives with a passion for history.

Dr Sarah Morris was born and bred in England and now lives in the picturesque Oxfordshire countryside.
In 2010, she began writing her first Tudor novel, "Le Temps Viendra: a Novel of Anne Boleyn". This was published in 2012, followed closely thereafter by two non-fiction books: "In the Footsteps of Anne Boleyn" (2013) and "In the Footsteps of the Six Wives of Henry VIII" (2015). Both were No 1. Amazon Bestsellers.

As the In the Footsteps books attest to, Sarah has a particular passion for historic buildings. She knows that when we visit a place, we can connect more directly with the past. She adores sharing her love of England’s history and Tudor places. Thus, in 2018, she launched The Tudor Travel Guide, an online brand that weaves the stories of Tudor history and people with the places in which those stories unfolded.

Sarah not only writes regular in-depth blogs that put Tudor buildings and their history under the spotlight, but she creates ‘on-location’ podcasts (The Tudor History & Travel Show) and videos (YouTube: The Tudor Travel Guide) which aim to inspire and educate. She also runs tours and annual Tudor-themed events, such as her ‘Live Like a Tudor Weekend’

On TV, she has featured in "A Tale of Two Sisters" on Yesterday TV as the ‘Boleyn expert’, talking about the relationship between Anne and Mary Boleyn, and on "Les Secret D’Histoire", a hugely popular French TV series, (10 million viewers) speaking about Mary I.